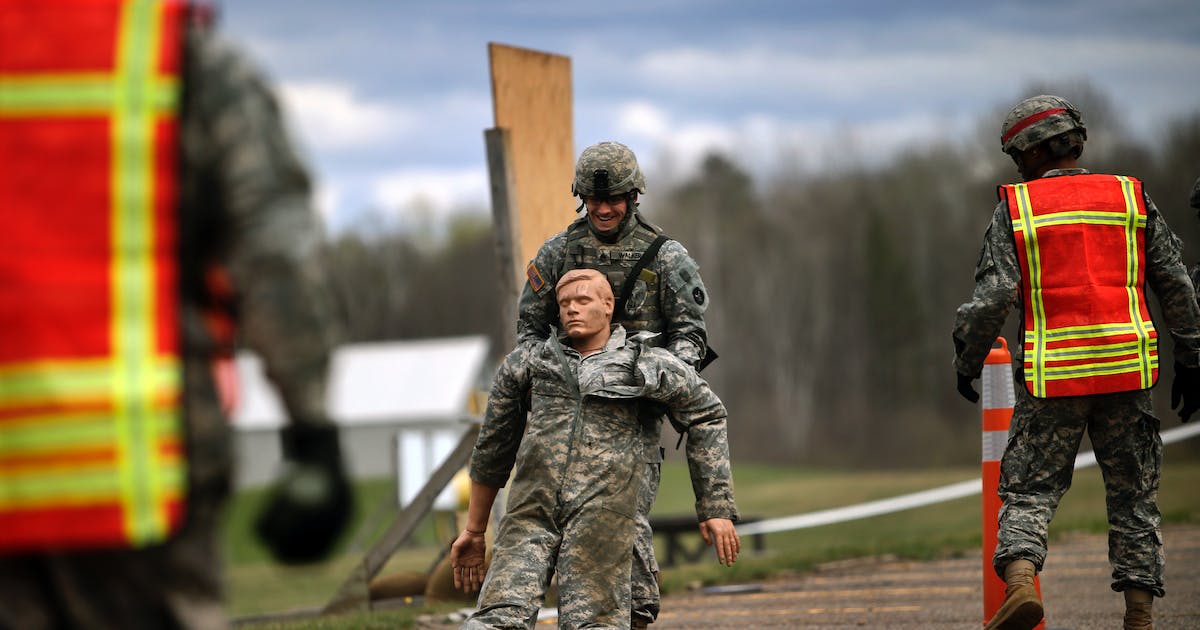 Listen and subscribe to our podcast: Through Apple Podcasts | Spotify | stitcher

For nearly a century, soldiers preparing for battle have honed their skills at a massive military facility in the center of Minnesota: Camp Ripley.

The 53,000-acre campus is larger than the city of Minneapolis. Simulated wars are fought in this slice of Morrison County, where tanks, missiles and heavy aircraft are a regular part of the landscape. It is the primary training area for the Minnesota National Guard and a key resource for local law enforcement and other military agencies.

“Who is Camp Ripley/Fort Ripley named after?” asked Newland, an elementary school librarian in Fargo who lives in Harwood, ND “I grew up near Camp Ripley, and my father worked there for his entire career. I am curious to learn more about this military facility.”

A century ago, Minnesota National Guard training took place at Camp Lakeview in Lake City, southeast of Red Wing. That 200-acre site operated from 1891 until 1930. But the massive advancement in weapons technology that came with World War I meant a 200-acre facility was far too small for a military newly focused on planes and artillery.

In the 1920s, the leader of the Minnesota National Guard, Adjutant General Ellard Walsh, set about to find a site suitable for modern warfare that was connected by roads and railways. He settled on the spot in Morrison County, near an abandoned military encampment created in the 1840s when the US Government relocated the Ho-Chunk Tribe to a reservation in what is now central Minnesota.

Naming that frontier military encampment was a source of great controversy back in the 1840s. First it was named Fort Marcy, after William Marcy, the US secretary of war at the time. Then it was Fort Gaines, after Edmund Gaines, a career military officer who fought in several wars (and also testified at Aaron Burr’s trial for treason). And then, finally, Fort Ripley.

“There was consternation in DC over what to name it,” said Randal Dietrich, the executive director of the Minnesota Military Museum at Camp Ripley. “The St. Paul newspaper said, ‘Just pick a name!’ “

Ripley was an homage to Brigadier General Eleazer Ripley — who never lived in Minnesota. Ripley was born in New Hampshire during the Revolutionary War, worked as an attorney in Maine, then served in the state Legislature in Massachusetts. He was commissioned as a lieutenant colonel when the War of 1812 broke out and established his reputation in a series of battles, earning the Congressional Gold Medal. He later moved to Louisiana, where he served as a US representative.

When the old fort was named, there wasn’t even such a thing as the Minnesota National Guard. The Guard’s lineage can be traced to 1856, when the first uniformed, volunteer militia company was formed in St. Paul—the Minnesota Pioneer Guards.

When Minnesota still marked America’s western frontier, the fort’s location was strategic: At the confluence of the Mississippi and Crow Wing rivers, and along a wagon trail that connected Fort Snelling with Fort Garry in Winnipeg.

The old fort had been mostly abandoned — its buildings damaged by fires — when construction of the massive new Minnesota National Guard facility began nearby in 1930 with a new airfield. But the original name stuck.

Training for an evolving battlefield

The nature of warfare has changed dramatically since Camp Ripley opened in 1931, and the facility has kept pace with the latest demands.

Before World War II, Minneapolis-Moline introduced a new 1/4-ton, tractor-like military vehicle at Camp Ripley. Soldiers named it “Jeep” after a character in the Popeye cartoons because of its versatility, according to a 1944 advertisement in the Minneapolis Tribune. The company boasted in the ad that this was “the original ‘Jeep’ … a child of Minneapolis-Moline” — though other firms are also credited with inventing the vehicle.

The post-Vietnam shift from a military draft to an all-volunteer force saw huge growth in the Minnesota National Guard. In the 1970s, soldiers at Camp Ripley began a regular troop exchange with Norway, which continues to this day. In the 1980s, Camp Ripley opened a winter operations school so training elements could be used all year long.

In the early 1990s, as Desert Storm and Desert Shield leaned much more heavily on reservists than previous wars, more than 600 Minnesota National Guard members who’d trained at Camp Ripley were activated to fight.

After 9/11, Camp Ripley opened an urban warfare training center, a simulated village of 26 buildings where soldiers train to better understand the improvised explosive devices that became a key weapon against US forces in Iraq and Afghanistan. Soldiers also trained there on how to fly unmanned drones.

Stephanie Newland’s father, Howard Larsen, retired from the Minnesota National Guard a couple decades ago as a chief warrant officer.

Newland’s upbringing was colored by Camp Ripley: helicopter pilots flying low, their entire house shaking during artillery training, and showing Norwegian soldiers around Little Falls when they visited for the exchange program.

“Helicopters would fly really low over our house,” Newland said. “We could see the National Guard guys training, practicing parachuting, and they would wave at us in our yard.”

Today, the only recognizable part of the original Fort Ripley that remains is an old wood door frame that the on-site military museum secured from the original fort. That will be featured in the museum’s new 40,000-square-foot facility just down Highway 371 from Camp Ripley, slated to open in 2024.

If you’d like to submit a Curious Minnesota question, fill out the form below:

Why do military cargo planes regularly fly in pairs over the Twin Cities?

What does it take to become a police officer in the state of Minnesota?

Is Duluth the most inland seaport in North America?

How many WPA projects were built in Minnesota as part of FDR’s New Deal?

Why do Minnesotans have accents?