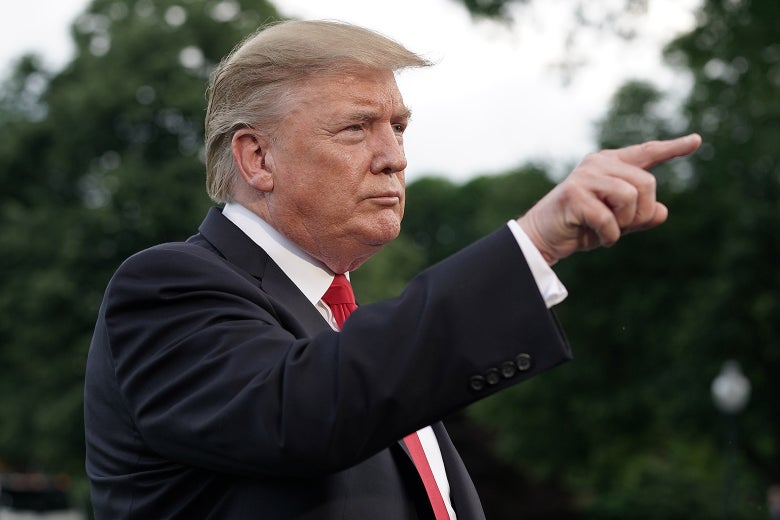 Trump plans to replace the military as a civilian police force.

The presidency of Donald Trump, marked by cruelty, corruption and contempt for the rule of law, has been disastrous for our democracy. If there is a bright side, it’s this: Trump’s abuses have exposed weaknesses in our laws and institutions that were previously hidden and that we can now begin to try to correct. We learned about one of these weaknesses in February, when Trump leaned on the National Law on Emergency Situations to requisition funding that Congress specifically denied for the construction of a border wall. The latest such legal loophole is another emergency power that could allow the president to transform the military into his own immigration police force.

According to a report In the Daily Caller last week, the Trump administration plans to invoke the Insurgency Act to give federal troops the power to detain and deport undocumented immigrants to the United States, essentially acting as a immigration and customs officers. The White House, asked about the option last week, refuse to exclude it.

If Trump follows through on this plan, it would be a staggering abuse of authority, on par with the president’s declaration of a “national emergency” to build the border wall. In either case, the president seeks to harness an authority clearly intended for the most serious and unusual circumstances to deal with a long-standing problem that does not constitute an urgent or overwhelming threat. In either case, the president’s goal is not to avert disaster, but to score political points with his base and consolidate his own power.

The Insurgency Law is an exception to the general rule, enshrined in the Posse Comitatus Act, that presidents cannot use the army as a national police force. Posse comitatus, in the words of a former defense ministry official, reflects “one of the clearest political traditions in Anglo-American history: that the use of military power to enforce civil law is detrimental to civilian and military interests.” Deploying soldiers as police officers not only violates democratic sensibilities; this increases the risk of interactions with civilians going awry, as the armed forces are not trained to conduct law enforcement activities. On the other hand, every soldier engaged in law enforcement is removed from military priorities.

The insurgency law gives the president a dangerous amount of discretion.

Despite this strong tradition, there are times when the law permits the domestic use of the military. The insurgency law allows the president to deploy federal troops to quell national uprisings and enforce the law when civil law enforcement is hampered or overwhelmed. As the name suggests, Congress intended the law to be used only in the most extraordinary situations, and only when absolutely necessary to preserve civil order. For the most part, presidents having honored this intention. The law has not been invoked since 1992, when George HW Bush used it to help quell the riots in Los Angeles following the acquittal of police for the brutal beating of Rodney King.

It goes without saying that the presence of undocumented immigrants in the United States does not justify invoking this powerful emergency power. There is no uprising, no breach of civil order. For better or for worse, immigration officers are quite capable of carrying out deportations. at record rates.

Unfortunately, however, the insurgency law, like the National Emergencies Law, gives the president dangerous discretion. The Uprising Act authorizes the deployment of federal troops “whenever the President considers that obstructions, combinations or illegal assemblies, or a rebellion against the authority of the United States, make the application of the laws of the United States impracticable. United in one state by ordinary law. during the legal proceedings. The judgment as to the existence of these loosely worded conditions is left entirely to the President. The National Emergencies Act, for its part, allows the president to declare a national emergency – and therefore invoke dozens of special statutory powers – without defining the term or specifying substantive criteria that must be met.

Both laws also lack checks and balances to deter or correct abuse. In their current form, none of these laws contain any express provision for judicial review or any time limit on the duration of the exercise of the powers they confer. And while the National Emergencies Act includes a weak safety net in Congress – any member can force a vote on a resolution to end the state of emergency, but passing the resolution still requires a majority to veto test – the insurgency law doesn’t even go that far. Senate Majority Leader Mitch McConnell could prevent the Senate from considering legislation to withdraw troops.

Congress adopted these vast delegations of power on the premise that presidents could be trusted to act honorably and in the best interests of the nation. Whether such an assumption is wise when passing ordinary legislation is debatable. When presidents are granted extraordinary powers to implement a state of emergency or to deploy federal troops at the national level – powers which by their very nature pose serious risks to a democracy – trust should not be never replace prudent substantive limits and rigorous procedural controls.

A rare opportunity now exists for Congress to reform these authorities. Republicans, worried about how a future Democratic president might use emergency powers, are stand in line behind legislation to reform the national law on emergencies. Many of them are undoubtedly motivated by an aversion to the goals of Democratic politics, rather than a genuine concern about excessive presidential discretion. Nonetheless, the reform they support – a requirement that Congress approve states of emergency within 30 days – is exactly the type of control that is needed to prevent presidential abuse and excesses. Depending on how events unfold, Republicans may be willing to support reforms similar to the insurgency law.

Ironically, some Democrats are balk at reforming the national law on emergency situations, suggesting that the law could be a useful tool for future Democratic presidents facing an obstructionist Republican Congress. This approach is understandable but short-sighted, and ultimately dangerous for our democracy. Trump is aberrant in many ways, but he’s not the first president to abuse power, nor will he be the last. To the extent that his actions have highlighted specific authorities which are particularly susceptible to abuse, it is up to Congress to reform these laws before Trump, or any other president, exploit them more– using emergency powers to close communication facilities, or by deploying the army to suppress anti-government protests. As Trump has already laid the groundwork to challenge the legitimacy of any electoral defeat in 2020, the problem is as urgent as the one this country faces.

Trump has shown what can happen when Congress delegates too much discretion to the president. To call this a â€œgood time to learnâ€ is an understatement. For the sake of our democracy, Congress must heed the lesson underlying Trump’s abuses of power and change the legal framework for emergency powers to replace trust and discretion with meaningful checks and balances.