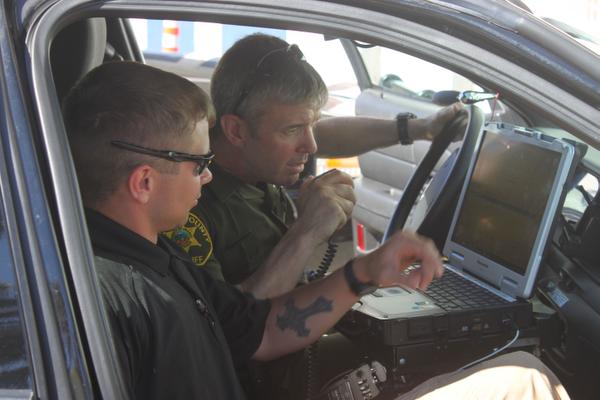 During the week of August 11-15, people around San Clemente may have noticed an additional occupant of the sheriff’s patrol cars cruising through town.

Twelve military police reservists from the 4th Law Enforcement Battalion rode with MPs, experimenting with the civilian side of law enforcement. The reservists are part-time Marines from across the United States who have full-time civilian occupations, and they were in two-week training at Camp Pendleton, the Orange County Sheriff’s Department Sgt. Werner Hartman, who helped coordinate the interface as grassroots outreach.

We spoke to Hartman and Gunnery Sgt. Earl Jordan, who has coordinated travel since the end of the Marines:

A. Jordan: Improve the skills (of reservists) as police officers here and on deployment as well. We are a deployable police force. Hartman: Military law enforcement and civilian law enforcement have common characteristics, but Marines operate under the Military Code of Justice where civilian police forces use state and local laws. The biggest difference is that their work involves military personnel or their dependents and ours involves military personnel (due to our proximity to the base), but almost all of our contacts involve non-military personnel.

Q. How did the idea come about?

Q. What did the military police learn from this?

A. Jordan: They’ve had lots of opportunities to meet mentally ill people, as well as overdose people, under the influence of drugs. We really don’t experience much of that on base. Hartman: While military law enforcement is very different from civilian policing, I think members of Parliament like to impart knowledge and the way we do things. Members rarely see narcotics, traffic collisions, domestic issues, civil litigation, etc., and exposing Members to these situations and answering questions is satisfactory for Members.