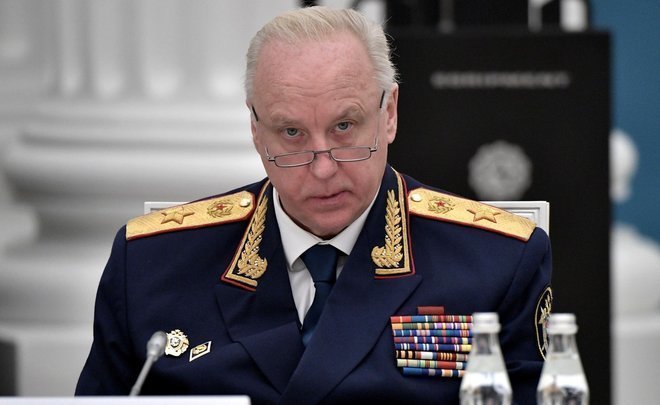 “The Ukrainian army understands the futility of resistance” — RealnoeVremya.com

Throughout the special military operation in Ukraine, the Investigative Committee of Russia records traces of crimes committed by nationalists. Among the main crimes of the Ukrainian security forces — the bombardment of civilians with artillery guns, tactical missile systems and mortars. In total, since 2014, the Investigative Committee has opened about 800 criminal cases related to the events in Donbass and Ukraine, department chairman Alexander Bastrykin told RT. Realnoe Vremya presents the main points of the interview.

“The figures are far from definitive”: around 800 criminal cases, thousands of victims

Russia’s special military operation in Ukraine has been going on for more than two months. During this period, Ukrainian nationalists bombarded residential buildings and civilian infrastructure with heavy weapons with highly damaging properties, said Alexander Bastrykin. In addition, they use prohibited ammunition.

“Our investigators are working on the ground, and we are getting more and more concrete evidence of the commission of particularly serious crimes against the Russian-speaking inhabitants of Donbass, who did not agree with the nationalist policy of kyiv, the ban of the language and who united to create the autonomy of the south-eastern regions of Ukraine,” said the chairman of the investigative commission.

According to Bastrykin, the actions of Ukrainian nationalists and the Ukrainian Armed Forces are characterized by “particular cruelty, selectivity, cynicism and ruthlessness”. They even demonstrate them vis-à-vis Ukrainians who “do not share their nationalist opinions”.

Most often, the Investigative Committee of Russia records attacks of Ukrainian security forces against civilians from artillery guns, tactical missile systems, mortars and small arms. Bastrykin especially noted the use of missiles of the Tochka-U tactical complex by the Armed Forces of Ukraine. He recalled that when they attacked in March, more than 20 people were killed in Donetsk and more than 30 were injured in various ways.

“115 people are involved in these crimes against the peace and security of humanity, which are not time-barred, of which 63 have been indicted. But these figures, we all understand, are far from definitive. Every day the investigation establishes new defendants, brings new charges against Ukrainian armed forces commanders and members of nationalist formations,” Bastrykin said.

The head of the investigative commission also mentioned that nationalists in Ukraine use civilians as human shields. According to him, the ministry has a lot of data confirming this. Everything is recorded in the documents of the criminal cases.

“People who arrived in Russia from Donbass and Ukraine spoke about the deployment of nationalists and the Armed Forces of Ukraine, their military equipment near five schools, as well as the use of hospitals and maternity wards by Ukrainian servicemen like shelter, the conduct of mortar attacks by Azov fighters from the territory of the Primorye trading center, the placement of firing positions by the Ukrainian army on the roofs of residential buildings,” Bastrykin said.

In total, since 2014, the Investigative Committee of Russia has initiated about 800 criminal cases related to the events in Donbass and Ukraine. Investigators have already interviewed more than 181,000 people. The number of victims exceeded the 59,000 mark, including more than 10,000 minors. The amount of claims for compensation for material and moral damage reached tens of billions of rubles.

The defendants in the criminal cases brought by the Investigative Committee are, among others, high-ranking Ukrainian officials, as well as representatives of radical nationalist organizations in Ukraine. As Bastrykin clarified, today there are 287, almost half of whom have already been charged. Among them – former Ukrainian Minister of Internal Affairs Arsen Avakov and Governor of Dnipropetrovsk Oblast Ihor Kolomoyskyi, Deputy Minister of Internal Affairs Anton Herashchenko, former Defense Ministers Valeriy Heletey and Stepan Poltorak, First Deputy and deputy heads of the Ministry of Defense Ivan Rusnak, Igor Pavlovsky, Oleg Shevchuk, Alexander Dublyan, commanders of individual units of the armed forces and participants of nationalist battalions.

“The Ukrainian military prefers to surrender when the opportunity arises”

According to Bastrykin, today there are more than 2,000 Ukrainian servicemen in Russia who have voluntarily laid down their arms. Among them are five brigade commanders of the Armed Forces of Ukraine who fought against the population of Donbass.

“Everyone sees that the Ukrainian military, no matter how it sounds in Western media and propaganda social media, prefers to surrender when the opportunity arises. They understand the futility of resistance,” Bastrykin said.

The Ukrainian soldiers who surrendered are questioned by the investigators. During interrogations, they speak, among other things, of mercenaries who arrived in Ukraine from other countries. Based on the data received, the commission of inquiry initiated criminal proceedings against 75 mercenaries from the United Kingdom, the United States, Norway, Canada, Georgia and other states.

Bastrykin also commented on the torture of captured Russian servicemen by the Ukrainian Armed Forces. According to him, there they “beat” them to try to get information about the special operation from them. The committee investigates these crimes.

“For example, several Russian servicemen participating in the special operation to protect the People’s Republics of Donetsk and Lugansk were shot at by Ukrainian security forces and captured in the Zaporizhzhia region of Ukraine. They were handed over to agents of the Ukrainian Security Service, who illegally detained them for ten days. At the same time, physical violence was systematically used against Russians,” the commission chairman said.

Bastrykin said that Ukraine is not fulfilling its international obligations – the country is not investigating crimes committed by Ukrainian armed forces in Donbass. He recalled that the norms of international humanitarian law oblige States to seek and bring to justice those responsible for war crimes or serious violations of the Geneva Conventions of 1949 and their Additional Protocols I and II of 1977. Kyiv does not prosecute not these people.

“The question of where the trial of the Ukrainian nationalists will take place is still open. We believe that several options can be implemented here. The principles of universal jurisdiction allow these criminal cases to be heard by a national court. At the same time, we would support the creation of a separate special court. The most important thing is that such a tribunal be impartial,” Bastrykin said.

He also noted that the competent authorities of Ukraine for far-fetched reasons persecute Russian deputies and officials. He considers these actions “absurd and illegal”.

Bastrykin also spoke about the investigation of a criminal case on the development of biological weapons of mass destruction in laboratories in Ukraine. The Investigative Committee of Russia has already identified the circle of people associated with this activity. Among them, representatives of the US Department of Defense and US contractors.

“It has been established that since 2005 the volume of US funding of biological programs in Ukraine amounts to more than $224 million. The United States constantly carried out work on the modernization and re-equipment of about three dozen scientific institutions of the Ukrainian ministries of health and agriculture, as well as a number of sanitary-epidemiological facilities of the command medical forces of Ukraine. Ministry of Defense of Ukraine,” Bastrykin said.

He clarified that before the start of the Russian special operation, the results of research carried out in Ukrainian biological laboratories were transferred to the territories controlled by the kyiv regime.

Russia’s Investigative Committee intends to continue investigating new information about biological laboratories operating in the neighboring country of Russia. In particular, the agency uses materials provided by the Ministry of Defense of the Russian Federation in its work.

“They are waging an information war against our country”

Since the start of the special military operation, the Investigative Committee of Russia has already initiated 35 criminal cases under the recently adopted Article 207.3 of the Criminal Code of the Russian Federation, i.e. for the public dissemination of deliberately false information about the use of the armed forces of the country, the execution of their powers by Russian state bodies.

Bastrykin also commented on the forgeries being circulated by Western media. According to him, some of them contain “frankly false information”. He considers that the discredit of Russia is the goal of some of these publications.

“They are waging an information war against our country. Our task is to explain clearly what is really happening, to show evidence of crimes, our position. And we will continue to do so,” Bastrykin assured.