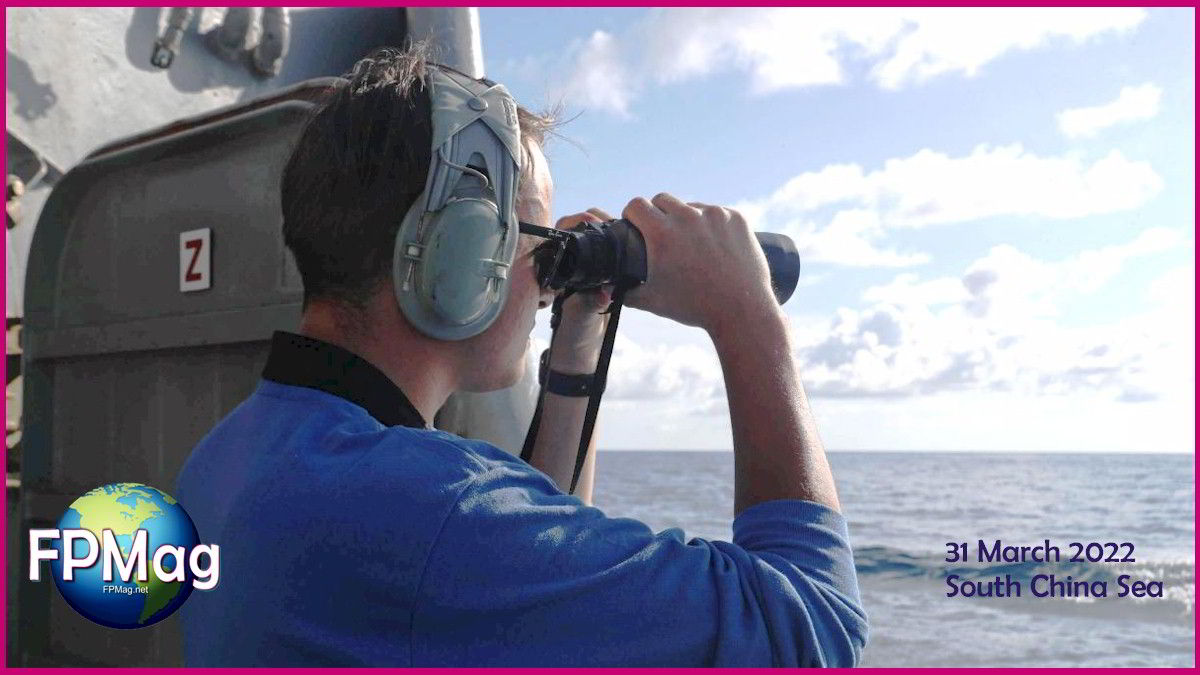 Subi Reef is now a huge island fortress in the province of Palawan, Philippines, now with seven sites of controversial Chinese military construction activity in 2022 as of May 5, 2022. The construction appears to be a prelude to war.

“It’s a huge military fortress in the Philippines Exclusive Economic Zone and it explodes into an armed fortress with more arms and ammunition than many countries have,” says Dale Carter, director of security for the RINJ Foundation, who says the dispute in Philippine waters and in the South China Sea has deprived more than 2 million families of their livelihoods and food.

How did this get so out of control?

In its exclusive economic zone, the coastal state being the Philippines in this case, has sovereign rights over Subi Reef. But China built an artificial fortress and loaded it with weapons and command, control, communications, computers and intelligence (C4I) devices and manpower.

The US 7th Watch Fleet in the South China Sea

“Aggression Events of a Hysterically Bigoted CCP, against 40 countries surrounding the South China Seas, jeopardize families’ seafood supply and suppress the movement of goods,” a global civil society women’s rights group says of the growing aggression in the South China Sea. The women proposed a formula for an interim cooperation agreement to the United Nations and parties to the SCS dispute.

On the base of some corals and rocks occasionally protruding from the water surface of the South China Sea, China claimed, just after World War II, ninety percent of the 3.5 million square kilometers of the South China Sea.unquestionably sovereign‘ territorial waters, according to a book by renowned author, Robert D. Kaplan.

Australia put it succinctly in mid-2020: There is “no legal basis for China to draw straight baselines connecting the furthest points of maritime features or ‘island groups’ in the South China Sea”.

Feature articles on the enigma of the South China Sea

Simularity and a global civil society group together call further Chinese expansion on military islands in the Philippine Sea “dangerous”.

“We are very connected to the women of Asia, especially the ASEAN countries where we have 2 million members,” says Michele Frances of the global women’s rights group RINJ Women.

“I am a practical person who manages clinics and a small hospital where rural populations would otherwise not have these services. So when decisions are made in G20 countries, especially in the Anglosphere, decisions that ignore humanity, I see what is in the hands of the worker going to the mouth of the worker getting smaller and the action become a less frequent action during the day.

“People need three meals a day. This especially includes children. When China started driving fishermen out of their normal, natural fishing grounds it was much worse when Portugal, Spain, England and France did it, it ended the chain of food supply in many parts of the world. Today, instead of treating rare diseases, we medical workers are fighting the essentials: starvation, malnutrition and hunger. It made me cry once, but now every time I see a child starving to death, I’m not afraid to say I’d love to smash the faces of the politicians who did this. Anger has replaced tears and the queues are no longer for food, they are queues for last rights,” the dedicated humanitarian explained.

As China militarizes the Philippine Sea, it is using its naval militia to keep fishermen away from their fishing waters.

13 nautical miles from the Philippine occupied island of Pag-asa (Thitu), all within the exclusive economic zone of the Philippines

There are seven sites of various construction activities in 2022 as of May 5, 2022

Photo credit: Simularity Satellite Imagery Inc. Photo taken by Airbus Defense and Space. Subi Reef areas of interest on the Subi Reef. According to Simularity Inc, “This breaking news story covers some new construction changes discovered at Subi Reef.
Subi Reef, occupied by the PRC, is only 13 nautical miles from the island Pag-asa (Thitu) occupied by the Philippines. Using recent satellite imagery and our analysis process, we have discovered seven sites for various construction activities in 2022 as of May 5. Sincerely, FPMag from the South China Sea Warning Team at Simularity »

“In the exclusive economic zone, the coastal state [the Philippines in this case] has sovereign rights for the purposes of exploration and exploitation, conservation and management of the natural resources, whether living or not, of the waters superjacent to the seabed and of the seabed and its subsoil, and with regard to d other activities for the economic exploitation and exploration of the area, such as the production of energy from water, currents and winds, in accordance with the relevant provisions of this Convention with regard to the establishment and use of artificial islands, facilities and structures such as: