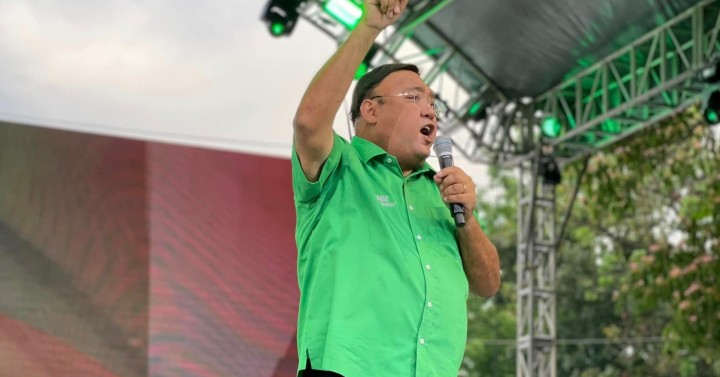 If elected to the Senate, Roque said he would review the provision regarding non-service crimes committed by U.S. soldiers.

In 2014, US Corporal Joseph Scott Pemberton killed Laude in Olongapo City. As legal counsel to the Laude family, Roque secured a 2015 homicide conviction against the U.S. serviceman.

The Olongapo City Magistrate’s Court sentenced Pemberton to a maximum prison term of 12 years. The court reduced it to 10 years based on an appeal. After serving his sentence for more than five years, Pemberton received a presidential pardon in 2020.

But Roque pointed out that Pemberton was never taken into custody by Philippine police during the trial. He cited a VFA clause that allows the United States to obtain custody of personnel arrested for a non-service offense pending sentencing.

Roque said such an arrangement contradicts the country’s VFAs with Australia and Japan. The Philippines has automatic custody of any Australian or Japanese personnel found to have violated national laws while not on official duty.

“In terms of criminal jurisdiction, our military agreement with the United States should follow our VFAs with Japan and Australia. Otherwise, we will find it difficult to prosecute foreign soldiers who commit heinous crimes in our country,” a- he declared.

Roque recommended that custody of visiting service members accused of a crime in the Philippines be turned over to Philippine authorities.

“Our experience with the Laude case shows that although our defense treaties with the United States are in effect, the Philippines is still treated as a colony of America,” Roque said.

The former presidential spokesman noted that only US military personnel enjoy this special treatment in the country.

Roque also said an American revealed that Pemberton would shuttle between the Philippines during the trial.

“If a Filipino soldier commits the same offense while on official duty in US territory, I believe US authorities would automatically demand absolute custody of the Filipino suspect,” Roque said.

The Philippines and the United States signed a VFA in 1998, which reaffirmed their obligations under the mutual defense treaty. (PR)

NATO will not extend its jurisdiction to Eastern Europe