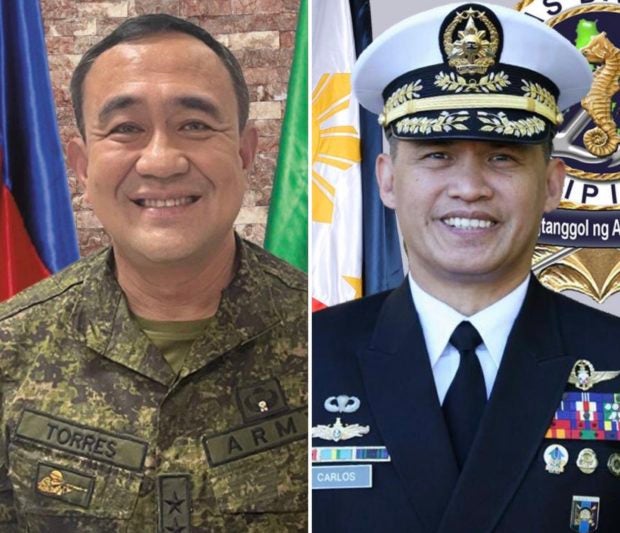 Retirements lead to a major reshuffle in the PH army

MANILA, Philippines – A major shake-up is looming in the Armed Forces of the Philippines with the recent and upcoming retirement of senior officers in key positions.

His nomination papers were signed by President Rodrigo Duterte on January 7.

Torres is a member of the Class of 1989 of the Philippine Military Academy.

Commander of the Philippine Fleet, Rear Admiral Alberto Carlos, will take over the reins of Western Command (Wescom) in Palawan to replace Vice Admiral Ramil Roberto Enriquez, who will reach retirement age of 56 on January 24.

Carlos’ new designation was signed by Duterte on Monday, January 17.

As commander of Wescom, Carlos, a graduate of the US Naval Academy class of 1989, will oversee the country’s western border, including the Kalayaan group of islands in the Western Philippine Sea.

He will assume leadership as China continues to aggressively enforce its mythical nine-dash claims to the Western Philippine Sea and nearly all of the South China Sea.

The commander of the army’s 11th infantry division, Major-General William Gonzales, has been named the new AFP inspector general, replacing Lieutenant-General Nemesio Gacal, who retired in December. Gonzales is a member of the PMA Class of 1989.

Navy Inspector General Rear Admiral Rommel Anthony Reyes, also a member of the PMA Class of 1989, will assume the post of AFP deputy chief of staff on February 25, after retiring of Vice Admiral Erick Kagaoan.

Vice Navy Commander Maj. Gen. Nestor Herico, a member of the PMA Class of 1988, will take command as commandant of the Philippine Marine Corps beginning Feb. 21, while Maj. Gen. Ariel Caculitan will retire from service.