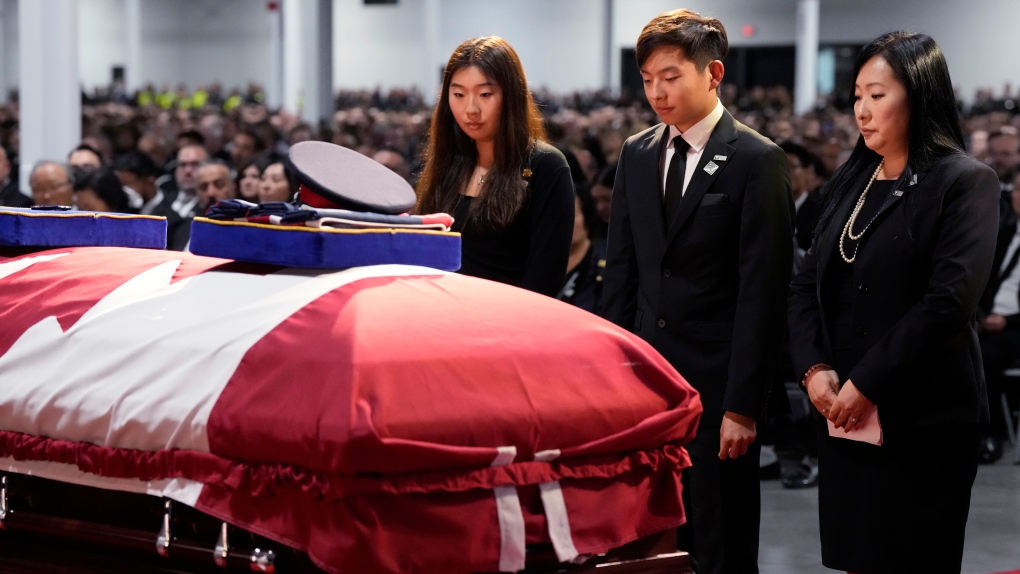 const. Andrew Hong was hailed at his funeral on Wednesday as a kind and dedicated public servant who loved his home and working families dearly and touched everyone who met him.

Family members, dignitaries and thousands of officers across the continent attended the funeral of Hong, the 48-year-old Toronto police officer who was fatally shot in an ambush attack in a cafe in Mississauga last week.

Addressing the crowd of thousands gathered at the Toronto Convention Center where the funeral took place, Hong’s widow, Jenny, said her husband had “two great loves” in his life.

“He had TPS and he had his family,” she said.

She recalled how her eyes lit up when he came home from training new officers on motorbikes and joked that she had come to think of TPS as “the other woman”.

“I see you,” she said, addressing the officers who were there to support her. “Thank you for your sacrifice and your support. I know you are all grieving for him too.

She said Hong was “my best friend” and the funeral is taking place a day before what would have been the couple’s 21st wedding anniversary.

“Andrew has given me and my children so many beautiful memories over the years. And although our time has been tragically cut short, I know Andrew would always be our hero and protector from above.

Jenny Hong (right), wife of the Toronto Police Constable. Andrew Hong and his children Mia (left) and Alex bow before his casket during his funeral in Toronto on Wednesday, Sept. 21, 2022. Const. Hong was shot last week in Mississauga in what police call an ambush. THE CANADIAN PRESS/Frank Gunn

Their daughter Mia also spoke out and called her dad a “symbol of everything I want to be.”

“I heard stories from my parents’ lives before I was born. As many of you have probably seen, he was a big guy. In his early years, it was a lot of lifting and going to the gym. But as he grew older, his love for his muscles and his cars turned into a love for his wife and children. He went from a stick-shift Volkswagen GTI to an eight-seater van.

She called her father a “hero” who has always been her biggest supporter.

A parade of officers and dignitaries lined up to pay their respects to Hong, who was hailed as a dedicated cop who enjoyed being a member of the car team and brought an outsized personality to match his tall stature.

“To the Hong family, please know that we will always be here for you. Lean on us, count on us. Just as we leaned and relied on Honger,” said Hong’s friend and the acting superintendent of traffic services. Matthew Moyer.

A number of friends and colleagues fondly remembered the late officer’s big personality, calling him a ‘big teddy bear’ always ready to ‘make you laugh’.

“His nickname is a true representation of his riding style as he was the rumbler on his motorcycle,” Const said. Dawood Khurshid, another friend from the car team. “He was so powerful that even the motorcycle was afraid of him.” 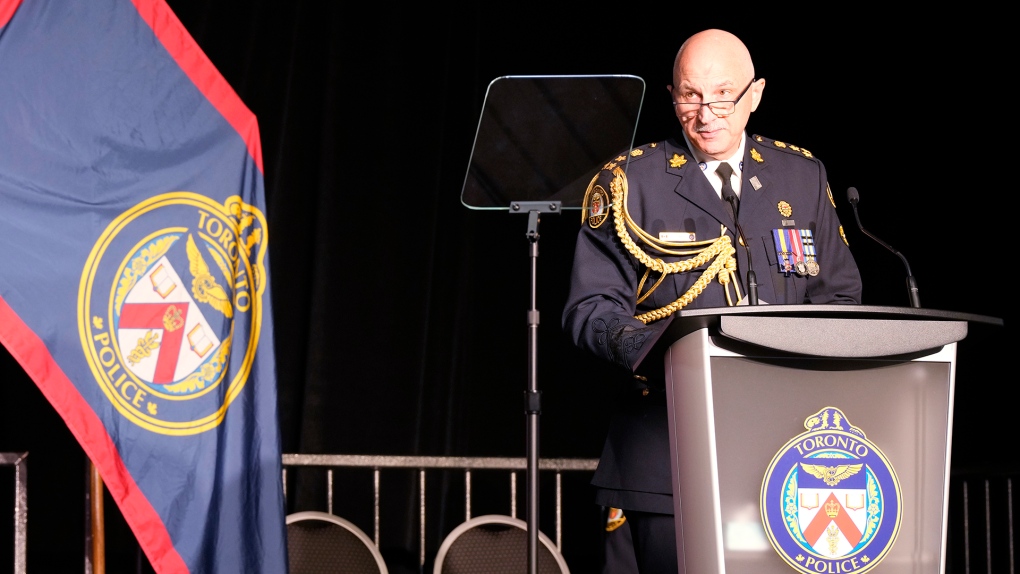 Heartbreaking at one point, Toronto Police Chief James Ramer recalled reading the social media tribute posted by Mia Hong after she “shared the horrible news” with the family.

Ramer said that “while we cannot share the depths of grief and sadness that Andrew’s loved ones feel, we can all share the work of maintaining his legacy”.

The entire city is in mourning with the Hong family, Mayor John Tory said.

“I told Jenny, Mia and Alex yesterday when I met them and the rest of their family that I was sure the 3 million people who live in the city would come to visit me s ‘they could have and I know they are here in spirit and in support today,’ Tory said.

Premier Doug Ford said “like many officers, we were told Andrew was made of steel on the outside, but had a heart of gold on the inside”.

The actual funeral began around 12:10 p.m. Bagpipes played as Hong’s coffin, draped in a Canadian flag, was carried into the hall by eight officers in ceremonial uniforms.

The ceremony included a traditional Korean folk song “My Beloved One,” which is about having courage in the face of difficulties, performed by the Korean Traditional Music Association of Canada, as well as prayers and other songs.

Toronto police said more than 8,000 people attended today’s procession, including 3,000 from outside their jurisdiction. They included officers from the Ontario Provincial Police and the Greater Toronto Area, as well as forces in Quebec, Halifax and the United States.

Earlier in the day, a hearse carrying Hong’s coffin left Kane-Jarret Funeral Home in Thornhill shortly before 9.30am and thousands of officers lined the road as it headed towards the convention center in Toronto. A ceremonial honor guard met the hearse outside when it arrived around 10:30 a.m. and carried the casket inside. 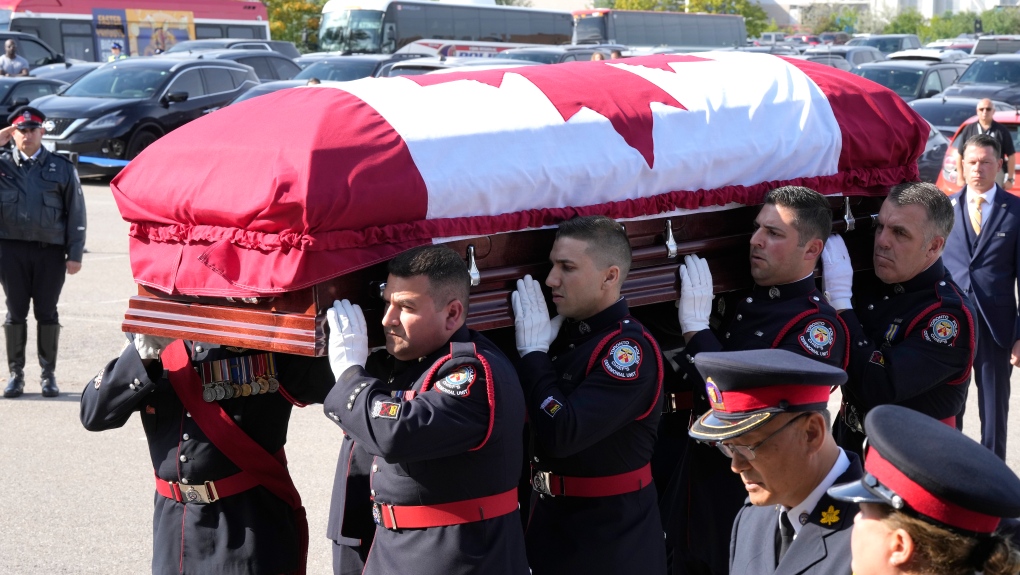 The coffin of Const. Andrew Hong is carried to the Toronto Convention Center during his funeral in Toronto on Wednesday, September 21, 2022. Const. Hong was shot last week while on a break during a training session in what police are calling an ambush attack. THE CANADIAN PRESS/Frank Gunn

GUNMAN WAS LOOKING FOR A POLICE OFFICER

Hong, 48, was one of three people killed by a gunman who went on a shooting spree in the Greater Toronto Area on Sept. 12.

He was taking part in a training exercise in Mississauga and was on lunch break when he was shot at close range in an unprovoked attack at a Tim Hortons. Investigators said they believe the suspect was “looking for a police officer“.

The shooter then crossed the road to another parking lot where he shot another person and stole his vehicle. He then drove to a body shop in Milton where he shot three more people. Shakeel Ashraf, 38, was pronounced dead at the scene while the third person who was shot and killed – 28-year-old international student Satwinder Singh – died in hospital days later.

The shooter was eventually found in a Hamilton cemetery, where he was fatally shot during an interaction with police.

Friends, colleagues and family have already remembered Hong, a 22-year-old force veteran, as a “larger than life” character, a lovable prankster who was affable and well-liked by all who met him. . 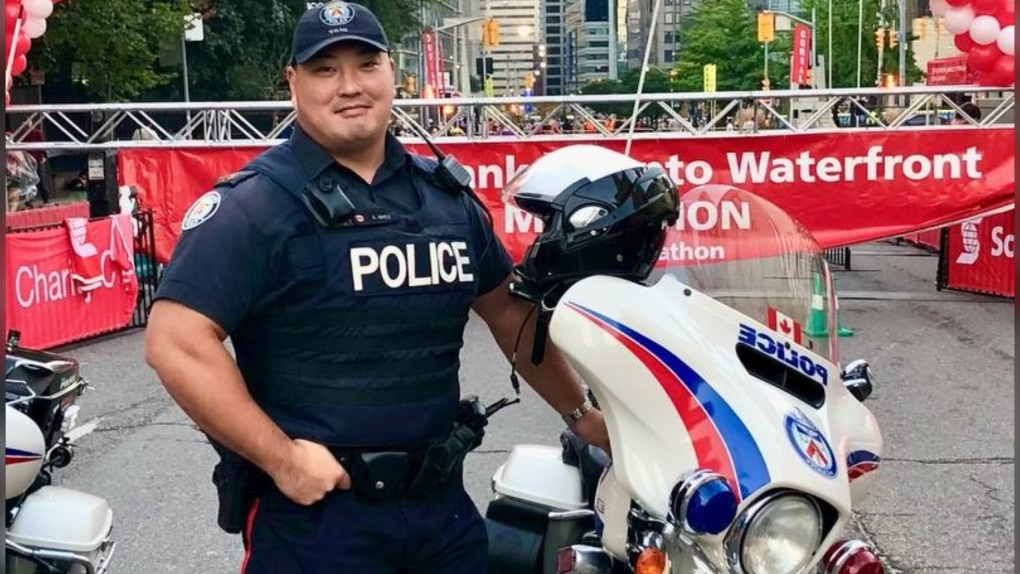 Constable Andrew Hong, who was shot in Mississauga on September 12, 2022, is pictured at the Toronto Waterfront Marathon in this undated photo. (Document /Toronto Police)

Hong is survived by his wife, two teenagers and parents. His family released a statement after his death, but asked for confidentiality while they mourn. The funeral was open to the family and their guests as well as members of the Toronto Police Service.

The public was invited to view the motorcade as Hong’s body was transferred from Thornhill Funeral Home to the Toronto Convention Centre. It was also streamed live online.

Books of condolences were made available for the public to sign at traffic services and Toronto police headquarters until Tuesday. Visitations also took place at Thornhill Funeral Home on Tuesday.