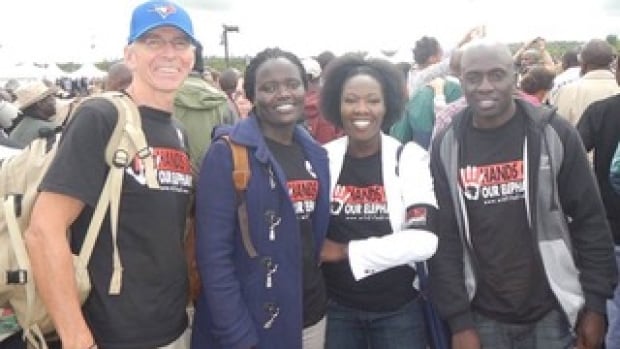 Chris Morris of Rothesay first traveled to Africa around 2007 on secondment to assist with the war crimes investigation of former Liberian President Charles Taylor.

While there, he discovered another issue that kept his conscience in mind: the poaching of wild animals.

Upon retirement from Saint John Police, Morris returned to Africa and now spends his time covering the court cases of suspected poachers in Kenya.

There are four “major” ivory trafficking prosecutions underway in the Mombasa area, said Morris, who is about a 30-minute drive north of his home in Diani Beach.

The 66-year-old goes to court every time there is a hearing or adjournment, reports it and shares the information with an organization called SEEJ, to Save the Elephants Through Education and Justice.

It takes a long time for a case to go through the court system, he said.

“One of the ones I’m looking at right now that started in 2015, there have been over 60 sessions in this case. And we probably still have a year left.”

The cases are linked to seizures, some of which took place in Mombasa. Others were in Thailand and Singapore, he said, but the ivory came from Kenya.

â€œWe are talking about three tonnes of ivory in each seizure,â€ Morris said.

Ivory is a status symbol in Chinese culture, he said.

Ivory is also considered a good luck charm by some.

Two tusks from an elephant shot in a reserve in Tanzania, he said, could be smuggled into Uganda, where they are placed in shipping containers and sent to Mombasa, then Singapore or Hong Kong and in Vietnam or China.

The â€œtransit hubâ€ for the illegal wildlife trade, he said, is Lagos, Nigeria.

Elephants are not the only animals hunted illegally.

The rhino horn has uses in traditional medicine, he said. Some even take it as a hangover remedy.

It is “much more” than ivory, he said.

Another hot commodity these days is pangolin scales.

They are also used in traditional Chinese medicines, he said, for cancer and “a whole host of diseases.”

“We’re going to have massive amounts of poached pangolins, seizures of, you know, up to 12 tonnes.”

Analysis of the DNA evidence has highlighted one or two criminal organizations coordinating the global supply of ivory, Morris said.

But “law enforcement agencies in the different elephant range states will very rarely investigate beyond the actual seizure,” he said.

“They don’t dig too far to find out where it came from or where it was going. They just stop people in the car and charge them with possession of wildlife trophies.”

Morris called a 2014 case a microcosm. The Kenya Wildlife Service stopped a vehicle from Uganda, he said, containing around 140 kg of ivory.

They arrested the two occupants of the vehicle, made a controlled delivery and were able to arrest two other people and discover a link with the Ugandan capital of Kampala.

A similar arrest was made three months later at a house in Nairobi, Kenya, and data from seized phones pointed to the same person in Kampala, a suspected large dealer.

But no prosecution has ever been brought against this person, Morris said.

“I cannot say for sure that this is corruption or that it is just that the investigative infrastructure does not allow it.”

Some of his colleagues have been threatened for their work to bring poachers to justice.

For about a year from 2015, Morris worked with an organization called Wildlife Direct.

They would send young lawyers to court to cover wildlife cases. One of those lawyers was accosted on a main thoroughfare in Mombasa by a man with a handgun, Morris said, who told him not to return.

On another occasion, the same young lawyer was met at his doorstep by a relative of an accused in a major ivory case, who attempted to â€œpersuadeâ€ him to stop covering these cases.

Safety can be a concern, Morris said.

But he has a good experience of hazardous work.

He served as a reservist in the Canadian Armed Forces with the 8th Hussars of Sussex and 722nd Communications Squadron in Saint John in the 1970s and 1990s.

He was a police officer in Toronto and then in Saint John.

And he also worked in Afghanistan in 2012-2013 as a mentor-advisor on an RCMP peacekeeping mission.

Despite the security concerns and the horrific nature of the crimes he is covering up, Morris said he really enjoyed his time in Africa – the weather, the simpler way of life, the warm and genuine people.

He married a Kenyan national a few years ago.

He also enjoys the unpredictability of life there.

“I think we could say that our life here is pretty well regulated with, you know, government agencies, law enforcement, health agencies sort of looking after our well-being and providing a service that is by no means corrupt. And the same cannot be said for many countries in Africa. ”

Jurisdiction issues are another delay in prosecution, he said.

And the poachers are on the move.

About 10 years ago, most of the ivory came from Tanzania, he said, but that has changed in the past two years.

University of Washington conservation biologist Samuel Wasser analyzed DNA evidence of ivory seizures, Morris said, and followed the poachers as they made their way north from Mozambique to Tanzania, Kenya and Uganda. Now they are heading south again, he said.

“Poachers seem to be attacking more countries in southern Africa – Botswana, Zambia and Namibiaâ€¦ because the great defenders have unfortunately left.”

Chris Morris retired from Saint John Police in 2011 and now works to prevent poaching and ivory trafficking in East Africa with an organization called SEEJ – Saving Elephants through Education and Justice. 16:14

And now there is a new problem with Siberian mammoth ivory, he said.

Due to climate change and thawing permafrost in Siberia, it is bringing to the surface mammoth tusks from thousands of years ago.

Some people who have been poaching for years “are betting on extinction,” Morris said.

“You hold on to ivory and its value will increase.”

Morris sees signs of progress in the fight against poaching.

The amount of poached ivory, in particular, appears to have declined, he said.

It’s still a “huge” problem, Morris said, but “there is always hope.”

Outside The Wire: Explanation Of Netflix’s Military Sci-Fi Movie