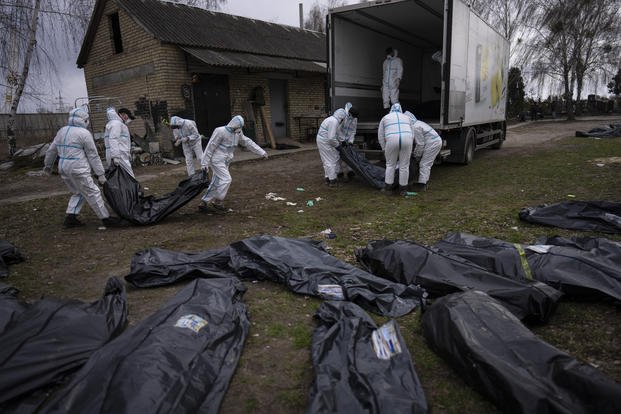 THE HAGUE, Netherlands — The chief prosecutor of the International Criminal Court on Thursday called for a “comprehensive strategy” to coordinate efforts to bring perpetrators of war crimes in Ukraine to justice.

Since Russian President Vladimir Putin ordered the invasion of Ukraine on February 24, his military forces have been accused of abuses ranging from killings in the Kyiv suburb of Bucha to deadly attacks on civilian facilities, including the March 16 bombing of a theater in Mariupol which an Associated Press investigation established likely killed nearly 600 people.

“The simple truth is that as we speak, children, women and men, young and old, are living in terror,” ICC prosecutor Karim Khan said at the opening of a conference on the responsibility of Ukraine in The Hague.

“They are suffering in Ukraine and in many parts of the world,” Khan said. “Crying what they lost yesterday, holding their breath about what they could lose today and what tomorrow may bring. At a time like this, the law cannot be a spectator.

Khan said Thursday’s ministerial meeting addressed “a need for coordination, consistency” and “the need for a comprehensive strategy” as different nations and courts work to investigate and prosecute crimes.

The AP and Frontline, which monitor incidents in Ukraine, have so far identified 338 potential war crimes.

As the meeting began in The Hague, Russian missiles hit the Ukrainian town of Vinnytsia in what Ukraine’s president called an “open act of terrorism” against the country’s civilian population.

Ukrainian Foreign Minister Dmytro Kuleba tweeted that “Russia is committing another war crime. … We will bring Russian war criminals to justice for every drop of Ukrainian blood and tears.”

US State Department human rights envoy Uzra Zeya accused Russian forces of atrocities as she delivered a message to Secretary of State Antony Blinken’s conference. She said the charges in Ukraine mirrored Russia’s past actions in the conflicts in Chechnya, Georgia, Syria and Ukraine since 2014.

“Every day, war crimes increase. Rape, torture, extrajudicial executions, disappearances, forced deportations. Attacks on schools, hospitals, playgrounds, apartment buildings, grain silos, water and gas facilities,” Zeya said. “These are not the acts of rogue units – they correspond to a clear pattern in all parts of Ukraine affected by Russian forces.

About 40 countries from the European Union and around the world sent representatives to Thursday’s conference hosted by Khan, Dutch Foreign Minister Wopke Hoekstra and European Union Justice Commissioner Didier Reynders.

Reynders said the meeting came as Ukraine investigates more than 20,000 war crimes in addition to the International Criminal Court investigation and national investigations in 14 EU member states. Among the topics covered is how investigators in different countries can collect and document evidence, including of sex crimes, so that it can be used in other jurisdictions.

In a video message to the meeting, Kuleba called on the international community to establish a tribunal to prosecute Russian leaders for the crime of aggression – when one state launches an unwarranted attack on another.

The ICC has no jurisdiction to prosecute the crime of aggression in Ukraine because neither Russia nor Ukraine are among the Court’s 123 member states.

Kyiv, however, accepted the tribunal’s jurisdiction and that paved the way for Khan to open an investigation in Ukraine in early March after dozens of world tribunal member countries called on him to intervene. He traveled to Ukraine to see firsthand the horrors inflicted on the country and sent the largest team of investigators ever created by the court to collect evidence.

So far, the court has not announced any arrest warrants for suspects in the investigation that could reach the top of Russia’s military chain of command, as well as the Kremlin.

The ICC is a court of last resort that opens cases when other countries are unwilling or unable to prosecute. The Hague-based tribunal has no police force to make arrests and relies on help from other countries to detain suspects.

The EU’s judicial cooperation agency, Eurojust, helped set up a joint investigation team made up of Ukraine and five other European countries. The team is supposed to help facilitate the sharing of evidence.

Application of military discipline: how the UCMJ works