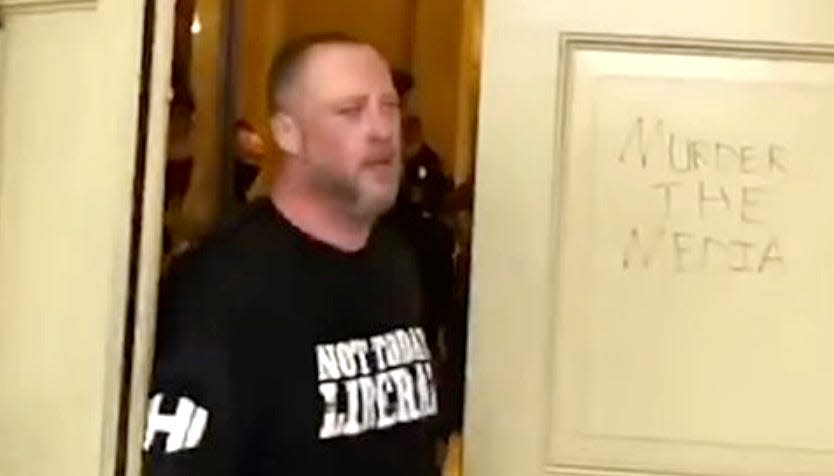 In another sign that the federal government’s investigation into the riots at the US Capitol is still progressing, a second person from Crawford County has been charged with crimes related to the storming of the building on January 6, 2021.

The defendant, Mikhail E. Slye, 32, of Meadville, is accused of using a bicycle rack to intentionally trip a US Capitol police officer during the Capitol breach, according to an unsealed criminal complaint before U.S. District Court in Erie on Friday.

Crawford County is one of seven counties in northwestern Pennsylvania under the jurisdiction of the federal court in Erie, which is part of the Western District of Pennsylvania, based in Pittsburgh.

In Erie, U.S. Magistrate Judge Richard A. Lanzillo presided over Slye’s initial appearance and released him on an unsecured bond of $10,000.

Authorities used surveillance footage and videos posted on the internet to help identify Slye, according to the criminal complaint. Help also came from a website called seditionhunters.org, which posts videos and photographs of the riots to provide information on suspects.

On January 18, 2021, seditionhunters.org posted a collection of screenshots taken from online videos of the Capitol riots on various social media platforms, according to the criminal complaint in the Slye case. Seditionhunter.org dubbed an unknown subject “JackTheTripper” – and that person was eventually identified as Slye, according to the complaint.

Slye is charged with tripping the officer as the officer and his team attempted to rescue another officer caught in the crowd in the Capitol’s Upper West Terrace area, the Justice Department said in announcing the arrest. of Slye. The officer fell down the stairs after tripping and injured himself, the department said.

Slye is also charged with illegally entering the Capitol twice on Jan. 6, 2021 — once, at 2:56 p.m., staying for three minutes, and again at 3:05 p.m., exiting at 3:35 p.m., the department said. of Justice. . Slye is accused of moving throughout the crypt area and other locations inside the Capitol.

The other Crawford County resident charged in the riots is Jeremy Vorous of Venango in northern Crawford County. He was charged in March 2021 with knowingly entering or remaining in a building or restricted land without lawful authority, violent entry and disorderly conduct on Capitol grounds, and obstruction of any official process.

Vorous, who was 43 when charged, awaits prosecution in US District Court for the District of Columbia. A status conference in his case is scheduled for October 27.

Vorous and now Slye are on a long list of Pennsylvania residents facing federal prosecution for the storming of the national seat of government in support of President Donald Trump on January 6, 2021.

With Slye’s arrest, more than 70 Pennsylvania residents have been charged in the riots. Florida leads the states with arrests, followed by Texas and then Pennsylvania.

In the 20 months since Jan. 6, 2021, more than 870 people have been arrested in nearly all 50 states for crimes related to the breach of the U.S. Capitol, the Justice Department said in Friday’s announcement. He said that number includes more than 265 people charged with assault or obstructing law enforcement.

“The investigation is still ongoing,” the ministry said.

Other defendants:Who They Are: 70 Pennsylvania Residents Arrested for Their Involvement in the Capitol Uprising

Unilateralism Against the Current of History Doomed to Failure