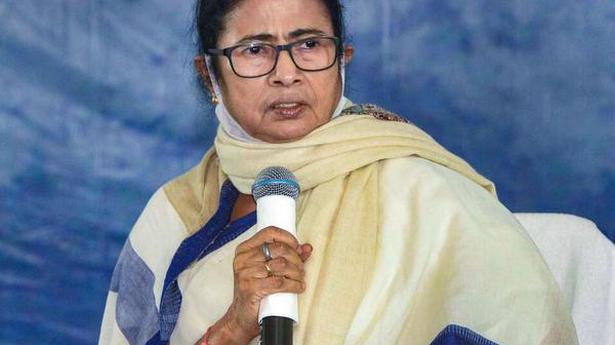 Amid heightened political tensions in Tripura and protests from Trinamool congressmen outside the Interior Ministry office in Delhi, West Bengal Chief Minister Mamata Banerjee left on Monday for a four-day visit to the national capital.

This is the President Trinamool’s second visit to Delhi after the West Bengal Assembly elections in which her party recorded a landslide victory over the Bharatiya Janata Party.

She is also expected to visit Prime Minister Narendra Modi on Wednesday.

“I’m going to Delhi today [Monday] because the day after tomorrow, I have an appointment with the Prime Minister on the issue of the BSF and other development issues related to West Bengal, â€she told reporters before leaving for Delhi. She accused the Union government of using central forces for the benefit of the Bharatiya Janata party.

â€œThe BSF is not my enemy. But the BJP thinks the BSF is the BJP. Public order is a matter of state and apart from state police there are so many agencies and all of them have their respective jurisdiction.

The recent notification from the Union Home Office extending the jurisdiction of the BSF from 15 km to 50 km along the border has become a flashpoint between the Center and the state government. The Trinamool government passed a resolution in the Assembly urging the Center to withdraw the notification.

The other issue that Ms. Banerjee is likely to discuss is that of the state’s pending funds with the Center. The chief minister criticized the Center for not making enough funds available to the state, especially after West Bengal was burnt to the ground by natural disasters such as cyclones and floods.

The chief minister said she would meet with MPs from her party who have been protesting outside the Union’s Home Office office since Monday morning.

â€œI will not join the dharna but I will meet the deputies to express my solidarity with their protest. I don’t know why the horror is happening in Tripura. Since yesterday [Sunday], MEPs have requested a meeting with the Home Secretary and so far have been refused, â€said Ms. Banerjee. She said that even the media are not allowed to work freely in Tripura.

Ms Banerjee’s visit precedes the winter session of Parliament and she will likely meet with leaders of opposition parties. After its previous visit in the last week of July, the TMC made inroads in Tripura and Goa.

One of the highlights of the visit in July was the meeting with the President of the Congress, Sonia Gandhi. In recent months, a number of congressional leaders, including former President Mahila Morcha Sushmita Dev and former Chief Minister of Goa Luizinho Faleiro, have joined the TMC. It will be interesting to see whether the Congress leadership contacts Ms. Banerjee or whether they contact the senior Congress leadership.

The visit also comes days after the Prime Minister announced the repeal of the three agricultural laws. Ms. Banerjee supported the protesting farmers and sent several delegations of party MPs to meet with the farmers. The president of TMC, who came to power in West Bengal defending the cause of farmers protesting against the forced acquisition of land, could also meet with some leaders of the farmers’ movement.

In addition, two visits to the national capital in less than six months also testify to the growing ambitions of the TMC, anxious to present itself as a pan-Indian party.