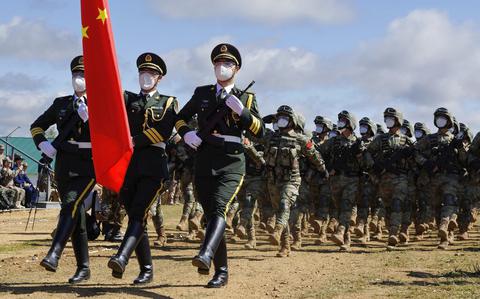 Russian forces began the large-scale Vostok 2022 military exercises in the Russian Far East and other locations on Thursday. The military exercises will last until Wednesday and 13 other countries, including China and India, will participate.

The exercises will be the Russian military’s first large-scale exercises since its invasion of Ukraine.

According to the Russian Defense Ministry, around 50,000 troops will join Vostok, which means East in Russian. Russia apparently intends to allay concerns about personnel and equipment shortages amid its invasion of Ukraine and bolster opposition to the West and Japan.

The military exercises will take place in the Sea of ​​Japan and the Sea of ​​Okhotsk, as well as at seven land-based training grounds.

This year’s exercises are expected to be joined by the largest number of foreign nations ever recorded, totaling 13 nations, including observers. Participating countries include India, which also values ​​its relationship with Japan and the United States, and Nicaragua, a Central American country ruled by a leftist government at odds with the United States.

Amid the ongoing invasion of Ukraine, the Kremlin appears to be trying to emphasize that it is not militarily isolated and to check growing US military activity in the Asia-Pacific region.

The Global Times, a tabloid published by the Chinese Communist Party, reported: “This is the first time that the PLA [People’s Liberation Army] sent three of its forces to participate in a single Russian exercise.” But Beijing has reduced the number of participating Chinese troops for Vostok 2022 to around 2,000 from around 3,200 in previous exercises.

According to an announcement from the Russian Defense Ministry, several fighter jets practiced intercept drills in Khabarovsk and other regions on Thursday. By the end of the exercises, more than 50 ships, including those of the Russian Navy’s Pacific Fleet, will practice exercises in the Sea of ​​Japan and the Sea of ​​Okhotsk, such as gunnery drills against air and sea targets and submarine detection exercises.

Russia also stressed that the Russian and Chinese navies will conduct joint military exercises for the defense of sea lanes and economic zones in the Sea of ​​Japan. The training grounds include Kunashiri and Etorofu islands in Japan’s northern territories, but the Japanese government has asked Russia to exclude the northern territories from the exercises.