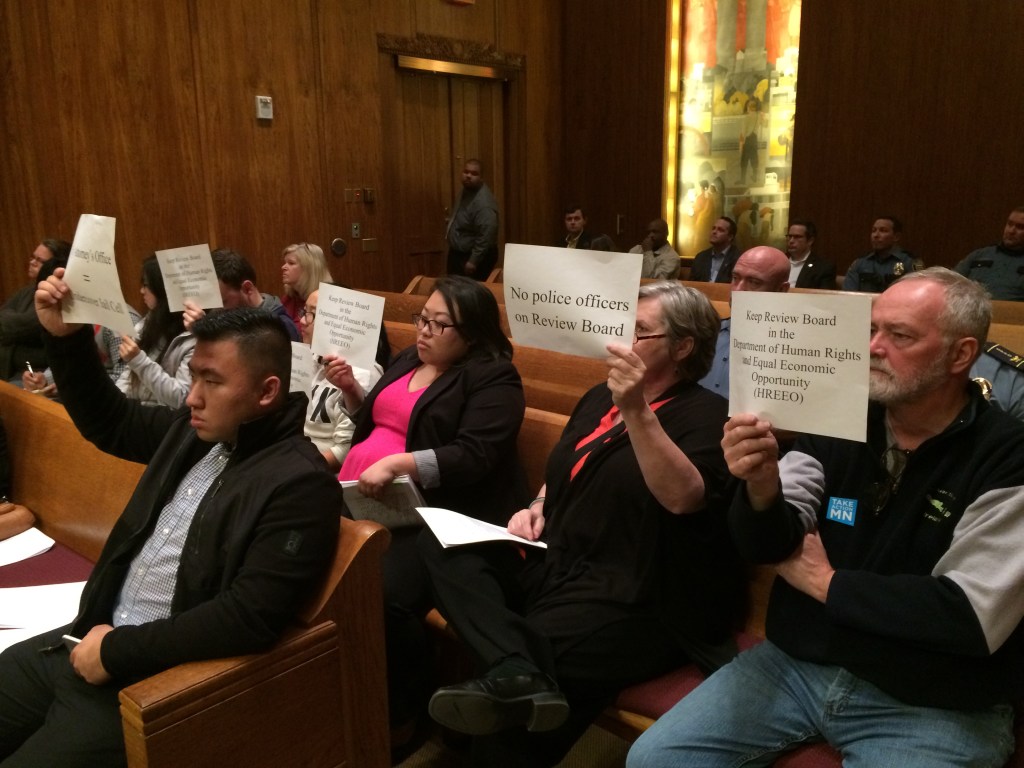 For the first time in its two-decade history, the Police-Civilian Internal Affairs Review Committee could be structured to provide an independent voice for community policing concerns . St. Paul residents continue to call on our City Council members to follow the recommendations of two independent reviews and provide the appropriate complement to the department’s internal review process with an all-civilian review panel.

Those who argue that including an active-duty police officer and commander on the commission is necessary to generate departmental buy-in are peddling a fake bill, and the residents aren’t buying. The police service‘s input is already built into the commission’s structure and process, so much so that its integrity as an independent review commission has been called into question by two reviews, both of which recommended that the police be removed from the committee. Those vying for the Ministry’s involvement should spend less time worrying about influencing the outcome of what should be a civilian commission and devote more energy to ensuring that fewer complaints end up before the council in first place.

Council members’ proposal to keep the police on the non-voting commission does little to address the problematic influence of the police on what should be an independent, civilian commission. Defense and prosecution attorneys are generally excluded from juries because of the common sense recognition that their participation would unduly skew the assessments of other jurors. Including the police in the commission is equivalent to including staff from the defense or prosecution team to deliberate in jury proceedings. This conflict is why most commission models are entirely civilian, including in places like Milwaukee, Baltimore, St. Louis and Cincinnati.

Community members are not opposed to the structured contribution of the police service and its collaboration with the commission. What we reject is a structure that allows for undue influence, where an active duty police officer and commander are allowed not only to vote, but also to insert perspectives through deliberation. Allowing the police to deliberate on the commission undermines the independence of a necessary space for civil assessment of community complaints. The Chief of Police, who ultimately has all the power to decide the outcome and any discipline for individual cases, deserves to have civilian recommendations that are not distorted by bias or influence.

Civilians serving on the review board have many opportunities for input and information from the police service. Internal Affairs prepares the investigation documents, which are reviewed by the commission. Internal Affairs representatives attend meetings and are available to respond to Commissioners’ questions or concerns. The degree of departmental input has, in fact, always been problematic, with Internal Affairs providing not only information on investigations, but also recommended results. PCIARC, almost without exception, followed these recommendations. Although this practice has ceased, it testifies to the need to preserve its independence.

Beyond the formal structures of contribution and collaboration, the civilians who serve on the commission undergo training in policing and are offered the continued possibility of being accompanied in the officers’ cars. Commissioners serve multi-year terms and acquire expertise. These are not individuals who seek to capriciously punish the police. But to truly serve the community through its strictly advisory role to the police chief, the commission must create independence from the department by removing officers and commanders not just from voting, but also from deliberation.

It should be noted that police interviewed by the U of M audit expressed particular concern about active-duty officers serving on the commission, who face a conflict of interest in reviewing their own peers.

In addition, the most recent audit expressed concern about the disconnect between the composition of the commission and the community members it serves. While more than half of police brutality complaints were filed by people who identify as black, only one in seven commissioners identified as black.

What I have learned in my work across the country is that an informed secular perspective in a thoughtful, thoughtful process is a great source of wisdom. I also know that lay people are often intimidated by “experts” and underestimate the importance of their own wisdom when “experts” are in the room. It is an advisory group – their advice should come from a process of accessing the wisdom of ordinary citizens.

Measure LL could bring a civilian police commission to Oakland