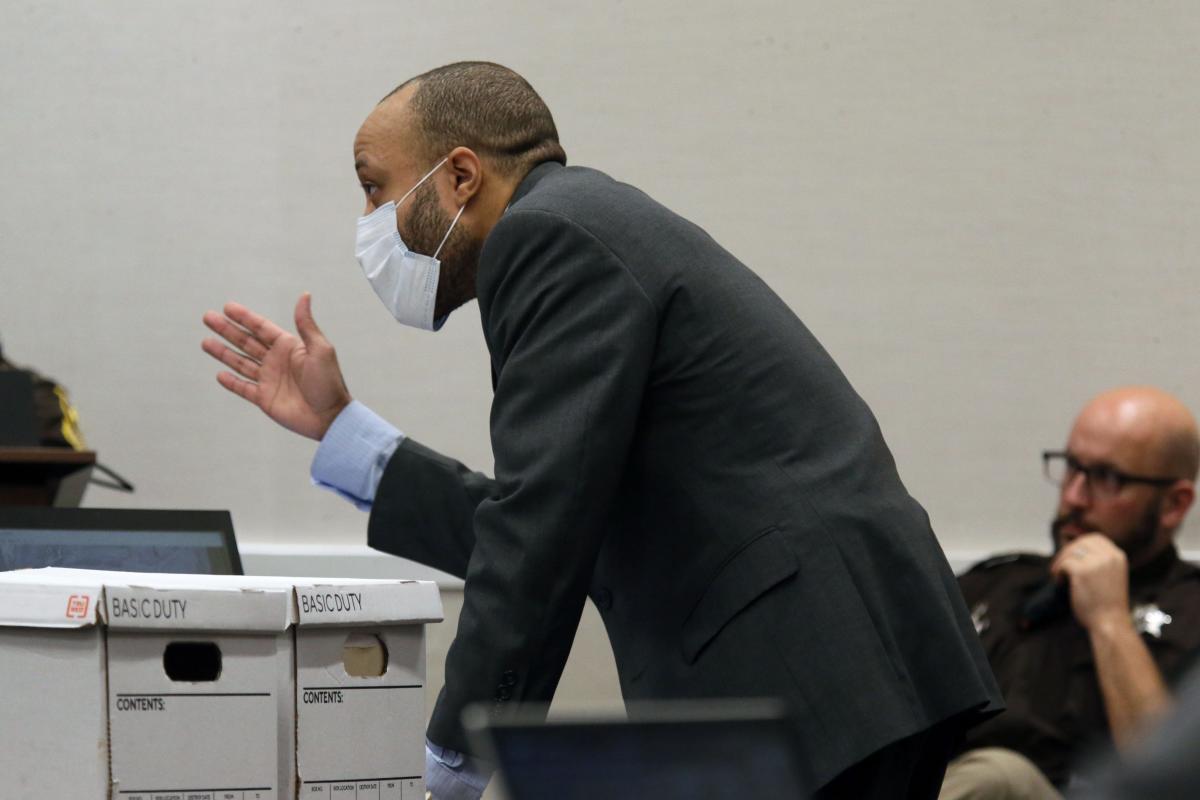 Prosecutors tentatively scheduled to close the state’s case on Monday, depending on progress in a trial that has seen extensive disruption.

Darrell Brooks Jr., 40, of Milwaukee is representing himself. He is charged with six counts of first-degree intentional homicide, 61 counts of recklessly endangering security, six counts of hit and run causing death, two counts of jumping bail, all felonies and of a battery chief for misdemeanor.

Here’s what happened on Friday.

Brooks gets into row with judge, invokes ‘sovereign citizen’ claims

The exchange happened when the jurors entered the courtroom. Dorow briefly dismissed them before reprimanding Brooks and telling him that he would have to participate in the proceedings from another courtroom if the interruptions continued.

During the dispute, Brooks again invoked “sovereign citizen” claims regarding court jurisdiction and other issues, which Dorow repeatedly described as a misinterpretation of the law.

“We are continuing with this trial, despite these disruptions,” Dorow said. “I was very patient with you yesterday” when Brooks launched into an impromptu 50-minute speech about his arguments.

“It is clear that this court has jurisdiction to preside over this trial to its conclusion,” Dorow wrote in his order.

State’s first witness Craig Liermann, deputy chief of the Franklin Police Department, was watching the parade with his family when he said he saw the red SUV driving “at high speed” and heard its engine revving in Main Street.

After the vehicle passed within 10 feet of him, Liermann saw the driver stick his head out the window and look back, giving Liermann a chance to see his face and hair.

He testified that he then saw the driver turn the steering wheel in the direction of the Waukesha Catholic Communities Group, driving through the parade participants.

“Based on her body language, my heart sank, because…it clearly looked like an intentional act,” he said.

Second prosecution witness Ralph Salyers, a Wauwatosa police officer who was walking with his daughter and their dog along Maple Avenue south of the parade route, said he saw a man matching Brooks’ description fleeing a Red SUV damaged after parade attack.

Salyers, who had attended the parade but was leaving, testified that the driver stopped the vehicle, jumped out, examined the damage, swore and drove away. He identified the driver as Brooks.

Salyers said he was within 50 feet of the man he saw running, but admitted during cross-examination of Brooks that he was unsure at the start of the driver’s run at that time. But he denied that his description of the driver came from later news reports.

The officer who shot the SUV testifies

Bryce Scholten, a Waukesha police officer who was assigned to traffic control during the parade, testified that he was in the path of the red SUV when it approached where it was parked at the intersection of Wisconsin Avenue and Main Street near the end of the parade route. .

As the SUV approached, Scholten noticed “extreme” damage, including a broken front end. He said the vehicle accelerated towards him, “that’s when I decided I had to use deadly force” to stop it. Scholten fired his gun at the driver, who drove off along West Avenue.

As the vehicle passed within arm’s length of him, he was able to see the driver up close, whom he identified as Brooks.

Under cross-examination, Brooks questioned Scholten’s decision to fire his gun, suggesting his intent was to kill the driver.

Christopher Moss, a Waukesha police officer who marched with the Color Guard at the front of the parade, testified to how he was led to the red SUV that was found parked in the driveway of a residence on along Maple Street.

Moss was flagged down by a man who spotted the broken SUV parked in that driveway several blocks south of the parade route. With this man in his patrol car, he drove to the residence and found the vehicle damaged.

As part of their investigation, Moss said police found documents in the vehicle linking him to Darrell E. Brooks Jr., with the vehicle being registered to Dawn Woods, Brooks’ mother.

During cross-examination, Moss acknowledged that he had received several descriptions of possible suspects, not all of which matched, of people seen fleeing the area after the parade incident.

In related testimony, Carlos Arechiga Nolasco, a resident of the Maple Avenue duplex where the SUV was parked, spotted the vehicle in his driveway. He saw someone jump out of the vehicle and run around the hood of the car and away from the driveway.

Nolasco reviewed surveillance footage showing a hooded figure running up the driveway and onto a sidewalk along Maple. He confirmed that the figure in the video matched the appearance of the man who fled the crashed SUV.

Day 9 of the trial: A member of the Milwaukee Dancing Grannies testifies “I thought I was at war”

Day 7 of the trial: “I still don’t know what happened to my daughter”, testifies the victim

DOWNLOAD THE APP: Get the latest news, sports and more