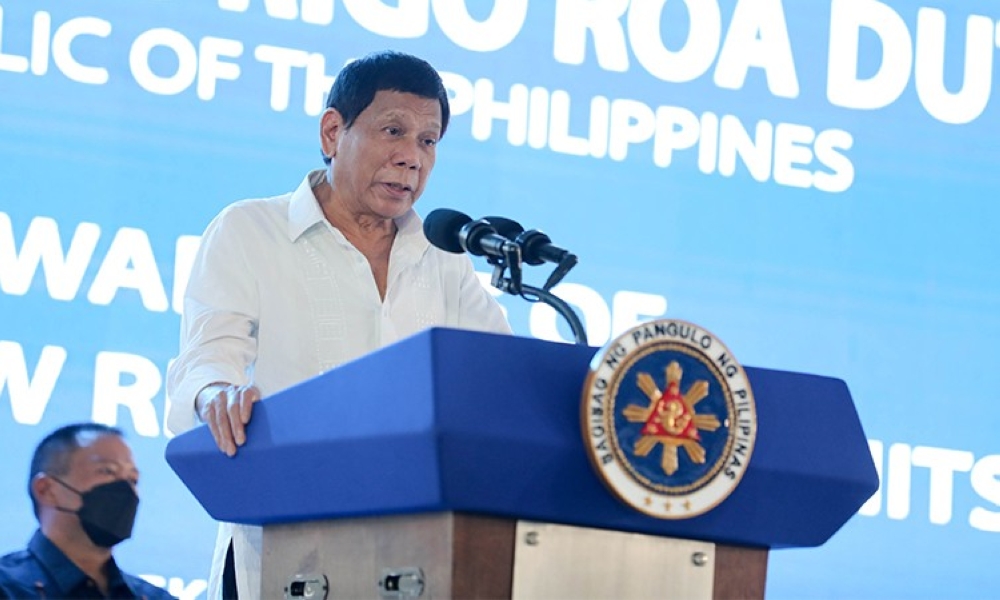 With less than a week left in his term, incumbent President Rodrigo Duterte has pledged to continue to protect police and military and officers who will face charges even after his term ends on June 30.

Duterte made the remark while awarding Madayaw Residences units in Davao City on Thursday, June 23.

“[E]Even if I am no longer mayor or president, basta (as long as) if it is done in the exercise of my functions, tutulungan ko kayo maski saan, abugado ako. Ilulusot ko kayo (I help you because I am a lawyer. I will help you out),” the president said.

He also thanked the police and the army for their support in ensuring public order in the city during his term as mayor.

“Without the support of the police and the military at the beginning of my term as mayor, I could not have succeeded. Davao would not be these beautiful industrial buildings that would make our people happy,” said Duterte.

The outgoing president also thanked his supporters who supported him all these years.

He also told the International Criminal Court (ICC) in his speech to stop threatening to investigate alleged crimes against humanity committed under the administration’s anti-illegal drug campaign.

In 2018, critics of Duterte’s war on drugs, as well as relatives of suspects killed in police operations, filed a complaint against the chief executive at the ICC for crimes against humanity.

Duterte had insisted that the ICC lacked jurisdiction to investigate the war on drugs because the Philippine justice system was functioning.

The Philippines officially left the ICC on March 17, 2019, exactly one year after the abolition of the Rome Statute.

Meanwhile, Duterte awarded 640 units of Madayaw Residences. According to the National Housing Authority (NHA), Madayaw Residences is one of the government housing projects in which the beneficiaries of the units include uniformed service unit personnel, government agency employees and laborers Filipinos abroad.

The president has pushed the NHA to strengthen its mandate to provide housing to the public even as the agency moves under a new head. Duterte’s term ends on June 30, with his successor, Ferdinand “Bongbong” Marcos Jr., taking the helm after.

“As the agency moves under new leadership in days, I urge the NHA to intensify its mandate to meet the housing needs of our countrymen, especially homeless, marginalized, and low-income families,” a- he declared.

Duterte’s term will officially end at noon on June 30. In previous speaking engagements, he said he would return to the city to spend his retirement.

A few weeks before resigning, he had returned to the city and wandered around the neighboring provinces of the Davao region with his motorcycle. RGL