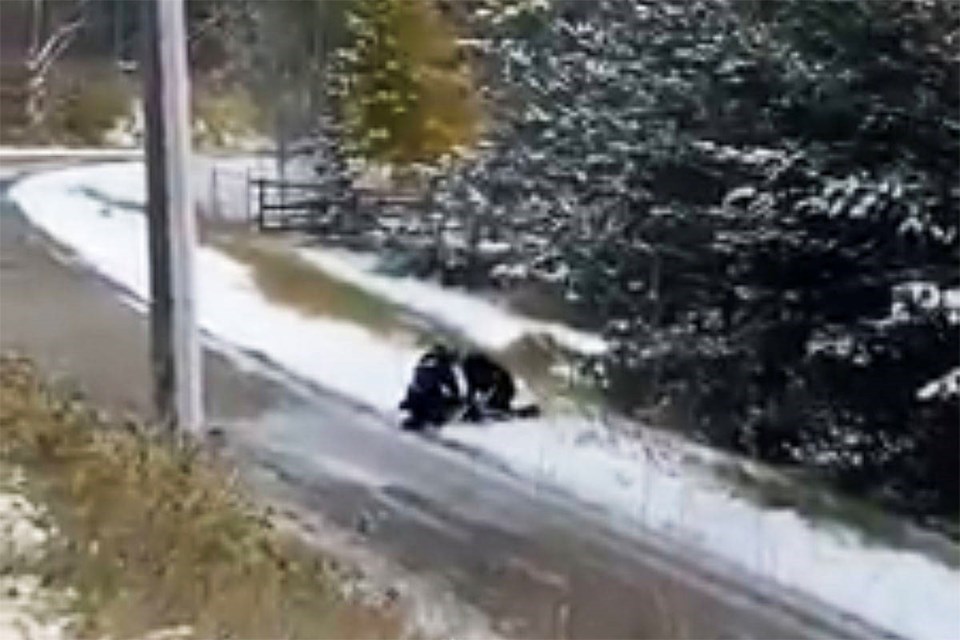 On October 25, 2020, a silver pickup truck, which reportedly drove irregularly on Route 1 in Kamloops earlier in the day, was finally pulled over by police mounted on Route 97 near White Road in Williams Lake at four a.m. of road.

The British Columbia Police Watchdog recommended charges stemming from a police chase between Kamloops and Williams Lake in October 2020 that was captured on video, triggering a public review after it was shared online by thousands of people. times.

A silver pickup truck, which reportedly drove erratically on Route 1 in Kamloops earlier in the day, was eventually pulled over by police mounted on Route 97 near White Road in Williams Lake, a four-hour drive away.

The driver of the vehicle, however, fled from the police and descended a nearby embankment in an attempt to escape after a brief foot chase.

A video posted online of the incident showed the driver appeared to be walking down the embankment to one of the two chasing officers. Video shows an officer pulling the man to the ground before a second officer rushes in and kicks him. This officer then appears to punch the suspect several times while he is on the ground, being arrested.

According to a statement from the Independent Investigations Office of BC (IIOBC) this week, the man suffered injuries that did not meet the threshold of serious harm as defined by the Police Act. However, given the significant public scrutiny generated by the video of the arrest, the Director of Police Services ordered an IIOBC investigation.

Chief Civilian Director Ronald J. MacDonald said after reviewing the evidence it was determined that “there are reasonable grounds to believe that one of the officers involved may have committed an offense related to the use of force during arrest ”.

The IIOBC has now forwarded its recommendation to the BC Prosecution Service, which will determine whether it will file a complaint.

In order to approve any charges, the BC Prosecution Service must be satisfied that there is a substantial likelihood of conviction based on the evidence gathered by the IIOBC and that prosecution is necessary in the public interest.

As long as the matter is in the hands of the Crown, the IIOBC will not make any further comment on the facts of the case.

“What is captured by the civilian video was the culmination of a high-risk multi-jurisdictional incident that endangered the lives of the public and the police in several communities,” Brown said.

Brown testified that just before 9 a.m. on October 25, 2020, Kamloops RCMP received a report of an erratic driver on Highway 1. The appellant reported that the driver was crossing on double solid lines, unable to maintain lane and traveling at varying speeds. Brown said Kamloops Mounted Police were unable to stop the vehicle, so information was released to neighboring jurisdictions to be on the lookout for the silver van. Interrogations of the truck showed that at a stop in Kamloops, a person driving it was found in possession of a loaded handgun.

An officer from Clinton found the vehicle, but the driver failed to stop and pulled away from the police at high speed after apparently passing four vehicles on the wrong side of the road in a blind turn.

The driver then failed to stop for officers at 100 Mile House when they attempted to stop him using their lights and sirens. The reader then narrowly missed colliding with an officer trying to stop the truck at 150 Mile House.

Just outside 150 Mile House, an officer successfully deployed a spiked belt. Despite two deflated tires, the driver continued with the rims bare until the truck was demobilized by another spiked belt near White Road on Highway 97, entering Williams Lake.

Brown said that was when the driver exited the vehicle and rolled down the embankment – where he was later grabbed by the two RCMP officers.

Brown said the man refused to comply with an officer’s orders to show his hands and a fight ensued with the officer attempting to pull the man’s hands under him in order to handcuff him .

The second officer responding, believing that the man could be armed and was not complying with the first officer’s orders, “used several strikes, including one with his foot to quickly take control of the suspect and resolve the situation,” said Brown.

The suspect was arrested and declared not to be in possession of a firearm.

The IIOBC is the independent civilian oversight body of the police force in British Columbia. It investigates all officer-related incidents that result in serious injury or death, whether or not there are allegations of wrongdoing.

The court ruling means the dismissal of Miami Twp. the police officer will be reinstated on November 8